​​​Whilst starting out at sea already as a teenager, I got some years later a Sea Captain degree (Nautical Science) from the Stockholm Maritime Academy. The career in the Merchant Marine started thereafter out as deck officer on the trade between Latin America and Europe. For the last couple of years I have mainly been Captain on expedition vessels from the Arctics to the Tropics (ref Expeditions).

I am at present (July 2022), serving as Captain on the expedition vessel M/S Togo in the Arctics (ref Officer).

Being a sailor means also periods of free time in between the onboard assignments. A couple of years ago he got the coincidental opportunity to jump in as a suddenly needed Extra to support his wife Eva Louise in a role for a commercial film production. This led quickly to a number of other movie roles incl. four as a Captain (partly just because he had his own uniform).

Apart from being responsible for a ship and its passengers, the captain has also a relation building duty in representing the owners.  Ulf then being a captain on a Swedish passenger vessel, started upon request to also entertain the passengers as an appreciated musician and entertainer. A combination which proved to be not only unique, but very successful.

​Ulf has over the years been able to travel all over the World.  Many times to remote places which are difficult to reach by ordinary transport means. His motto has been "Don't be a tourist". Instead he has been trying to find the hidden nooks and corners – the really interesting places to visit. Some which are shared under the tab World Traveller.

Also barbequing amongst friends ("If we are not
supposed to eat animals, why are they made out of meat?" (Homer Simpson). 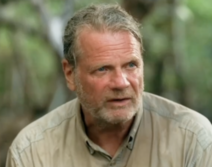 ​​​Sea Captain, World Traveller and Actor might sound as an odd combination. However - this rather unique synthesis has proven to add value to the served Ship Owner or Movie Production in a number of ways.​